Being in Vegas for a trade show meant that there wasn’t enough time to leave the strip, but we soon discovered that there were plenty of sneaker shops to explore within walking distance.

12AM:Run
12AM:Run is located in The Linq‘s new outdoor shopping promenade under The High Roller.  The simplicity of the curved shoe walls really highlighted the product.

12AM:RUN is co-owned by rap legend Nas so the unique decor was no surprise. We stopped in twice while in town and talked sneakers with the managers, who were both good dudes. I also bought my first pick-up of the trip from this shop.

Adidas
Adidas underwent recent renovations at their Las Vegas strip store so was great to get a quick look.  It was bright, open and had a great looking shoe wall.

Foot Action
The Foot Action at Miracle Mile Shops of Planet Hollywood was impressive. It had three shops in one; Kick’s Lounge, Foot Action, and Flight 23.

Each shop had a very distinct look from each other and all had a good selection of sneakers.  I was tempted by the The Air Jordan 5 PRM “Wine” but ultimately decided to pass.

Foot Locker
There was also a Foot Locker with a House of Hoops in the Miracle Mile, but, since they are so familiar to us in Canada I didn’t stop to take any photos.

Shoe Palace
We saw multiple Shoe Palace locations on the strip, including in the Grand Canal Shoppes in the Venetian, Fashion Show Mall and the Miracle Mile.  Each store looked different from each other with no brand consistency, but were still interesting to visit.

Fashion Show Mall’s Shoe Palace is absolutely massive and a real cornerstone to the mall. They used large geometric shaped walls to showcase their sneaker collections and large branded sections like the Converse wall below.

The Shoe Palace at the Miracle Mile had some really fun details around the store but the one that really stood out was the Jordan 11’s  hanging from the ceiling.

Nike
Last but not least, we visited the Nike at the Forum Shops at Caesar’s Palace. In fact, we took so many photos that it has its own blog post. 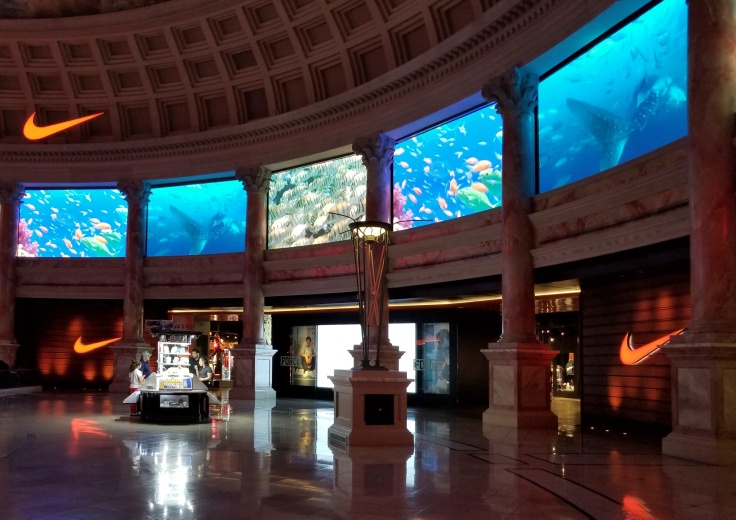 One thought on “Sneaker Shops on the Strip in Vegas”